We participate in communities online for various reasons.

Some members might dream of building a reputation, gaining domain-expertise recognition, landing a sweet gig, and selling the movie rights to one of their contributions.

Short of that, what else do your community members want in return for their time and efforts spent asking and answering questions, and engaging with each other?

On Quora, questions regarding “What’s my incentive to participate here?” have generated some good responses. Based on my reading and my experiences running digital strategy at numerous media organizations, I believe that individuals gather and participate – read, write, comment, share – for three main reasons: Revenue, Ego, and Adjacency.

Revenue refers to some form of direct payment: I perform some action a publisher finds desirable, and I am compensated for it.

Egos are fed by being seen, heard, and recognized for adding value to the community.

In a thriving community, these forces can work together, through the actions of the community organizers and its individual members, thereby raising the quality of the collective as a whole.

What drives you to participate?

In many communities, “Game mechanics” are employed, such as awards on Reddit and mayorships on Swarm. These feed egos by giving concrete rewards for specific accomplishments based on your reputation – while also providing opportunities for trusted members to help the paid moderation staff, or even perhaps to join their ranks. Reputation metrics should provide advancement paths through the system and incentives to work toward higher levels. The incentives should also be designed to advance the goals of the publisher, the members themselves, and the community as a whole.

These reputations and rewards systems have a long history

On Usenet and IRC (some of the earliest newsgroups and chat rooms), reputation was measured by a combination of community members and the moderators or operators who ran each space. If you stuck around long enough, and participated well in the eyes of the ‘Ops’ (operations staff), you could be given Ops status yourself.

On message boards hosted by many online communities, the date you joined and the number of messages you’ve left accompany each posting. As you participate, your title might change from “Newbie” to “Frequenter” to “Prolific Poster.” Each of those levels can come with additional privileges and opportunities. 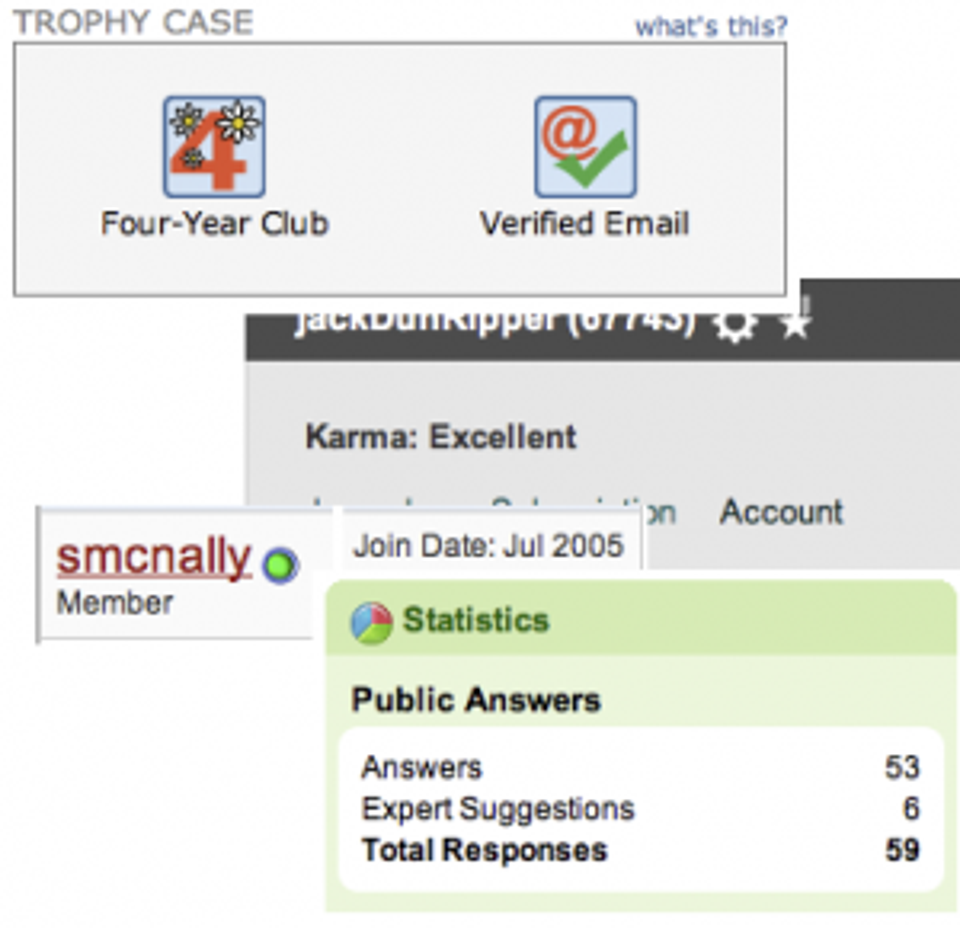 Slashdot, an early social news site powered by community submissions featured elsewhere on this site, codified much of this in their moderation system and a concept they called Karma. Karma was a “hard” reputation score: a running tally of how much you submitted, how many votes your submissions received, the amount of discussion generated directly from those submissions.

Good Karma permitted you to rate others’ comments. It also let you rate how other comments were rated. This “meta moderation” – curating the curators – was intended to thwart the efforts of those “enterprising cabals” who worked together to shepherd (or highjack) the conversation to their ends.

Karma took the concept of IRC’s Ops and scaled it by making a game of curation: For the Moderators, it was a little power trip as you got to play comment kingmaker. Moderating the moderators was a level above that. Most importantly, for the community at large, the discussion was (and is) filterable:  for example, “Show me only comments that have have been selected as interesting.”

Trophies, badges and mayorships all have value as reward mechanics in their environments. When dealing with ongoing, indepth reporting – where significant amounts of thought, expertise and time can be required to contribute meaningfully to the dialog – what type of rewards can you imagine would compel increased participation?

These could include featuring the best comments according to you and your colleagues; finding and featuring social media responses related to the topic of community discussion; appointing someone to curate the best responses in a follow-up piece. All of these tasks could also be potential rewards for exceptional community members, in return for direct payment.

What rewards would be of value to you as a valued member of the communities where you participate, or that you control? How can you encourage increased participation through meaningful gamification, while avoiding empty badges that the community might reject?

Steve McNally builds communities of creators and participants for publishers and brands. He’s worked with About.com, Condé Nast, True/Slant, Forbes, and Hearst helping talent find their audience, audiences discover new voices, and publishers and brands build their business by engaging with their customers and partners. Steve is currently working with creators who tell stories with Games. Find him @sjkmcnally on Twitter.

An earlier version of this article was published on Forbes. Reproduced and updated with permission.